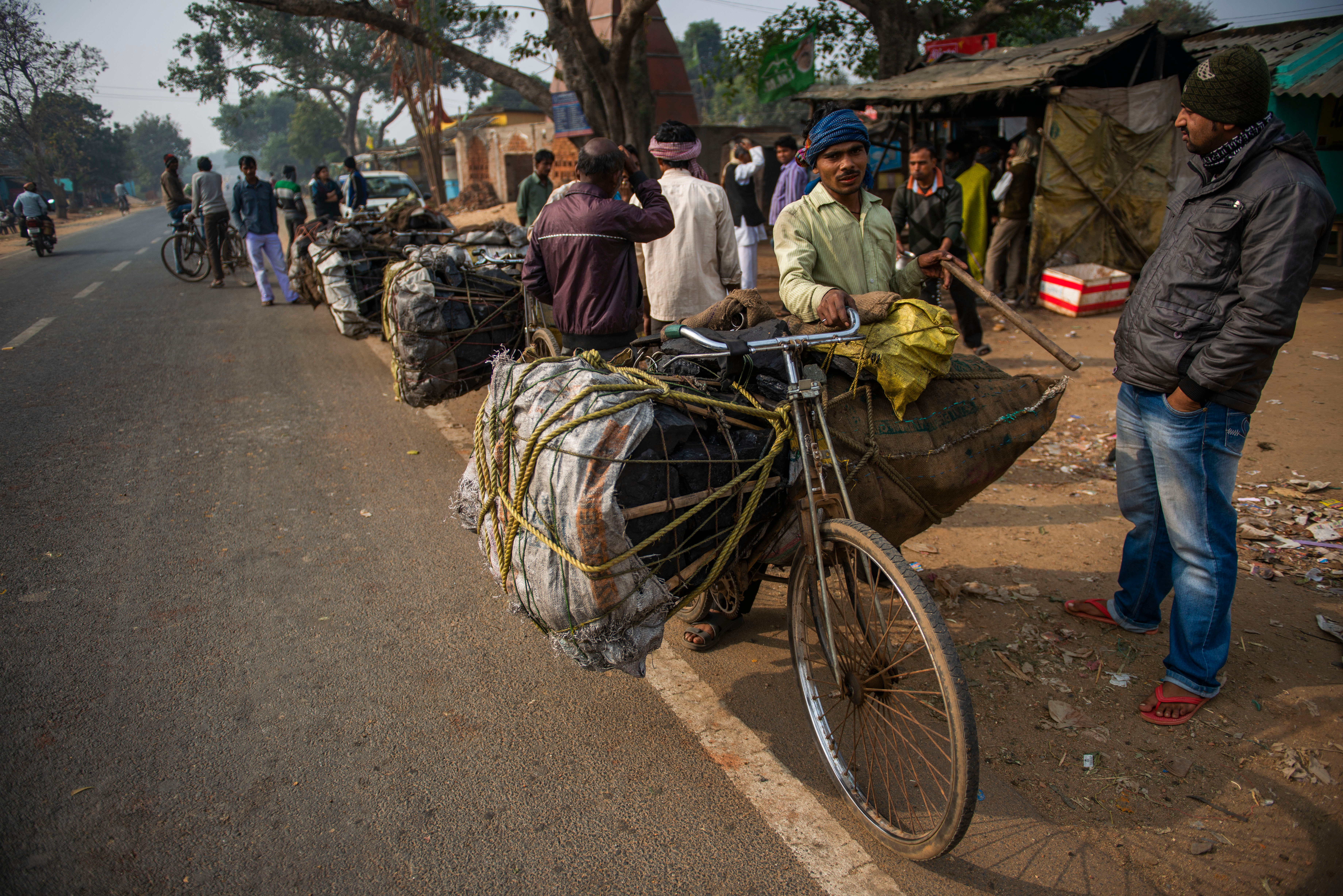 Development at what cost and for whom?​

Coal, on one hand, generates power, revenue for the State (Jharkhand) and leads to the creation of ancillary industries and service sector economy, on the other hand, it has also created an informal coal economy and powerful lobbies around that. Pilferage of coal is rampant in local mines and it benefits several segments from the poorest who have no means for livelihood and also other parties who have vested interests and get the larger share in the process, and the same stolen coal is fed into several smaller coal-dependent industries. It is a vicious cycle. The life of those at the bottom of the pyramid seems impacted most as one takes a deeper dive to gain some insights through a chat with Baleshwar (resident of Sutri village), who cycles 200 Kgs of coal through the day and travels miles before he reaches his destination to convert his effort into some wealth creation (!) end of the day. He chose to earn this way a bit early when he was quite young (12 years), years rolled and he is 35+ now. In absence of any other skills or resources, many like Baleswar find it an easy way of earning their livelihood. In the process for many, childhood is lost as they shoulder adult role at a tender age when they are not emotionally or physically mature enough and this load carrying for a long time may cause postural complexities and impact overall growth. They normally start their day as early as 3 am and walk with the cycle carrying a huge load for 30-50 km. And sometimes even more. It was not easy to stop Baleswar as he felt threatened and avoided. The fear of police deters them and somehow, they manage to cover the long-distance, hardly stop to rest and at times they leave the cycle with coal and run away due to the fear of getting caught and the penalty they may have to pay which may be more than what they can earn end of the day.

Baleswar walks like this 20 days a month and on average, covers 30 km. to reach Gola, Ranchi, or Jhalda and sell the sacks of coal (each sack will have 40 Kgs. of coal). Normally they carry about 4-6 sacks of coal to make it 200 kgs. This much coal is procured in Rs. 500 and sold in Rs. 1000. It is worth mentioning here that the raw coal stolen from the mines site is burnt for use before it reaches the market. Some are engaged only in collecting coal from mines and burning in heaps in their backyard. It was evident from such sight of burning coals at the backyard of the poorer households in the nearby villages that men in these families earn their living through collecting coal from mines illegally, passing it to the groups who carry coal to distant locations or themselves carry it in a cycle to sell it at the demand points. Those who carry it to distant locations for selling normally procure from these groups in sacks. An entire inter-dependent chain is created that way and later the same coal is supplied to traders, sweet shops, individual consumers, small ancillary industries that extensively use coal.

Baleswar earns about Rs. 10-12,000 a month. He lacks any education and other skills, landless but pen to learn new skills but he also feels it is a bit late in the day for him. He feels new skill generation for the youth may be useful.

The life of these cycle bearers carrying 200 Kgs. of coal day in and day out makes their life as dark and fragile as coal. It is just a hand-to-mouth existence and a struggle for survival and does not enable them to come out of the chronic poverty cycle. They inhale coal dust, fumes of burning coal, and their face, body, and little clothes that they wear also turn black and their tough battle makes their identity coal-like. It impacts their health severely and in absence of any social security or health coverage, their vulnerability is quite high.

Given this reality, how does one design an inclusive process to humanise the ecosystem and minimise vulnerability?

Does this manifest systemic exclusion of the poor who lack skill, access to land or resources and also do not have any social capital to fall back on or any social protection to restore their dignity or voice?